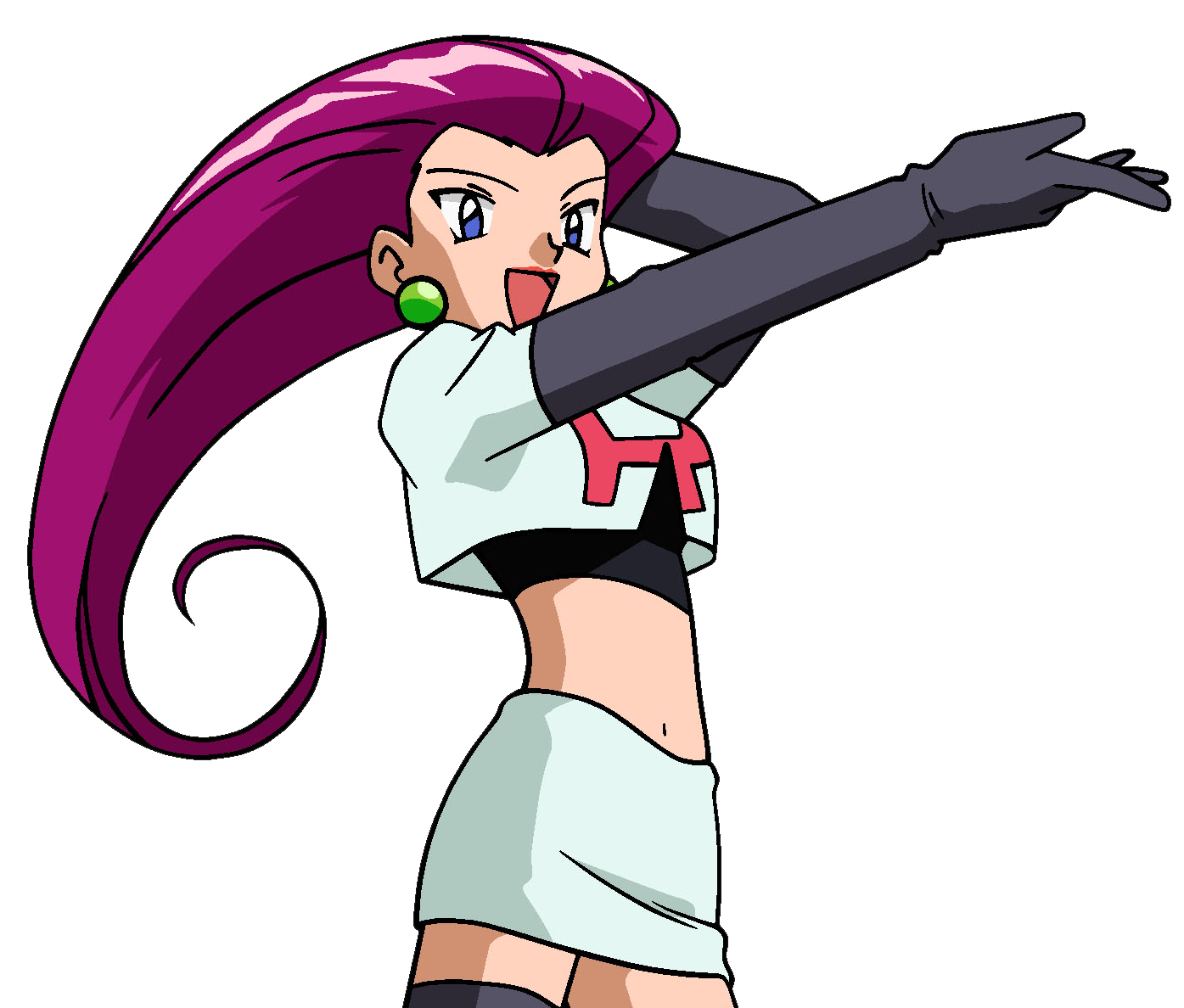 In A Hole Lotta Trouble, he told Ash that he just wanted to have a fair battle with him rather than resort to their dirty tricks suggested by Jessie and Meowth.

In Training Daze, he takes it upon himself to help Meowth whenever he gets stuck in the Obstacle Courses. He is especially careful and cautious with his Chimecho , treating it with additional care and not letting it suffer in battles, just like how Misty treats her Togepi.

He also tends to be good to people who treat him well, like his grandparents, as seen in the episode Sweet Baby James.

He was also seen comforting May when her Munchlax got sick along with his Chimecho in the same episode. In Sweet Baby James!

Confronting Ash's group, James asks them to keep his criminal work with Team Rocket a secret from his grandparents. James and May are also guarding the sick Munchlax and Chimecho as he comforts May about their caring for their Pokemon.

When everyone is asleep, Jessie and Meowth manage to steal his grandparents Pokemon including Mime Jr. Angered with his teammates, James then releases Cacnea to stop both Jessie and Meowth from attacking Ash's group.

As his Chimecho is not recovering, James is forced to leave it with his grandparents. Seeing him struggel with the departure, his grandparent's Mime Jr.

After that, James leaves with Jessie and Meowth after he tells his grandparents privately that he was indeed working for Team Rocket and he waves goodbye in tears to them while flying in the Meowth Balloon.

In The Treasure is All Mine! After being blasted off by Pikachu, James recalls the treasure box as he wants to reclaims it from Ash and the group.

Despite their failed attempts, the group is blasted off for the second time and the treasure box is given to Sebastian which is James' butler from one of his summer estates.

With their disguises blown off by his pet Growlie, James uses Mime Jr. James finally tells them about his first meeting with Jessebelle in his childhood during his parents' ballroom party and that Jessebelle was his first true love.

He, in fact, wrote the letter of engagement and hid it in the treasure box that his father gave him. Upon meeting Jesebelle, though, he learns that his parents arranged their marriage, and that she wants him to relinquish his pet Growlie and otherwise control his life.

After telling them about the situation, James notices flying blimps are heading towards the estate and realizes that Sebastian had called Jessebelle in response to his presence.

When Ash and Brock hold up the door, James eventually fights off the robotic treasure chest which he is unable to open.

He manages to stop it as the treasure box turns into a rocket, which he uses to escape. He was later confronted by Jessebelle one last time as James convinces Ash to send him and his teammates flying with Pikachu's Thunderbolt attacks.

Pikachu does this, but accidentally sends Jessebelle flying away instead of Jessie. The episode ends with Jessie surrounded by Jessebelle's bodyguards, and Jessebelle yelling at James and Meowth on a beach.

As of his, Jessie's and Meowth's promotion and transfer to Unova, James has become a highly skilled stealth artist, an excellent hacker, and is often successful in missions with his teammates; to the point of the trio becoming a serious enemy for Ash and his companions.

The trio was key in Team Rocket's Meteonite plan, taking orders directly from Giovanni himself as well as his secretary. James and his teammates worked together with Pierce and met Doctor Zager.

Once the plan culminated, James and his teammates were allowed to do as they please in Unova, so they continued to contribute to the Team Rocket organization and now work closely with Zager.

Ash has also become less important to them but they will still antagonize him if he interferes in their plans. In The Scare of Litwick Mansion , he, Jessie, and Meowth had their life energy drained at the hands of four Litwick after they are informed by Doctor Zager of their origins.

The trio is forced to aid Ash and his friends to battle against the four Litwick including its leader Lampent as they called a brief truce after being rescued by them.

After the incident and, with their life energy finally restored, James informs Ash and the group that they will get Pikachu the next time they meet after Jessie tells them they will meet them as enemies before the trio flies away with their jetpacks.

However, Druddigon manages to free Pikachu with its Dragon Claw before being caught by them. Their rocket soon crashes thanks to Axew's nearly mastered Dragon Rage which allows it and Druddigon to escape briefly in the mountains but they are soon attacked by both Yamask and Woobat.

When Ash and the group arrive to retrieve both, James lets Yamask unleash its Shadow Ball but it fails when Pikachu hits it and Woobat with his Thunderbolt.

In the episode, Gotta Catch a Roggenrola! One of the Roggenrola manages to warn Ash and the group about the incident in the cave. Ash's Roggenrola risks its life to save its friends.

Soon, James is forced to fight Ash and the group releasing his Yamask while teaming up with Jessie's Woobat. Despite their efforts, both of their Pokemon are defeated by Ash's Tepig.

They are soon forced to flee using jetpacks. James is disappointed with their failure while Jessie states that they will take over Unova for their boss, Giovanni, as they continue to fly away with their jetpacks.

In Meowth's Scrafty Tactics! However, this is actually a ruse so that Meowth can join Ash's group on their journey until in the episode Crisis from an Underground Up!

Team Rocket's nefarious act continues in Battle for the Underground where they are aided by Doctor Zager in their attempts to steal a subway train.

However, they are amused to see their boss, Giovanni, defeat Ash and his Pikachu using Persian, as well as to capture Meloetta in the aircraft.

Despite their success and their efforts for Giovanni paying off, he becomes consumed with his own ambitions and is possessed by the Reveal Glass to summon the three legendary Pokemon in the sky and turns them into their Therian forms so that Giovanni can control them.

The trio guards Giovanni while confronting Ash, Pikachu, and his Unfezant while Giovanni orders the Kami trio to intensify their strength.

When Pikachu destroys the platform Giovanni was standing with his amplified Electro Ball, he is consumed by his own evil ambitions and wants to destroy the Unova region rather than conquer it.

James, Jessie, and Meowth eventually tackle their boss to save his life and help him regain his senses. After Giovanni agreed to retreat immediately, James and Jessie help him to safety.

Both James and Jessie admitted that Pikachu is special to them while they are escaping in the helicopter until Giovanni's orders a total retreat back in Kanto.

The trio tried their best to hack their machines but failed when Team Plasma's forces overwhelmed them. When N and his foster siblings escape from the fog, the trio eventually found three Team Plasma grunts searching for N.

Both of them serve as a decoy so that Meowth can attack Colress. While Meowth makes a deal with Colress to act as a test subject for the machine, James and Jessie manage to trap all four of the Team Plasma grunts in an energy field.

Returning to find Meowth, James and Jessie were impressed to see Colress controlling the machine, until it collapses. Colress soon reveals that he's controlling Meowth, much to Jessie and James' shock.

They are forced to use both Frillish and Amoonguss to fight Meowth, but successfully detain Meowth. Both James and Jessie do their best to wake Meowth from his brainwashing, and eventually, succeed.

Jessie has her Frillish use Mist to escape with James and Meowth. After Team Plasma is defeated and disbanded, James, Jessie, and Meowth inform Giovanni about Team Plasma's defeat which he is very pleased with and he tells them to keep up the good work before hanging up.

The trio continues their plot to capture Pikachu but fail in every attempt. In The Dream Continues! He was impressed to see the trio defeat Team Plasma and wants to know of the results.

Meowth tells them about their next plan to capture Ash's Pikachu, until Jessie's Wobbuffet comes out from behind them and decides to travel with them again.

That night, after Ash reveals he's going to travel to the Kalos region, the trio decides to follow him there.

In the XY series, they return for their old antics as Jessie's Wobbuffet rejoins the team and finally demonstrates his defense abilities by countering Pikachu's Electro Ball with Mirror Coat.

Their success is short-lived, however, when Froakie blasts them off with Water Pulse before fainting.

Throughout the series, they are always blasted off by Ash and his group. The trio also fight against the evil Malamar who brainwash them temporarily and leave them with a lasting fear of James' Inkay.

In Heroes, Friends, and Faux Alike! They also commit petty crimes while disguised, like dining and dashing.

However the next day, they are confronted by Ash and the group while posing as them and they reveal themselves to be responsible.

James reveals that they posed as them to separate Ash, Serena, and Bonnie while trying to trick Clemont into making the Helioptile robot. They are blasted off soon by the robot, which exploded.

In some episodes, they continue their plans of capturing Pikachu, procuring valuable items, and stealing Trainer-owned Pokemon who can Mega Evolve, but their plans always backfire.

In A Stealthy Challenge! In Facing The Grand Design! Inkay angrily senses a truck is driven by an evil Malamar who speeds straight ahead and angrily follows it causing James to chase it while Jessie, Meowth, and Wobbuffet follow.

They discover that three trucks are parked at the foot of Grace Tower and the drivers of the truck are none other than three evil Malamar, much to their horror.

After hearing from Officer Jenny about the weapons seen in the radio observatory and three evil Malamar's grand plan, an explosion can be heard due to a ball of light.

They are confronted by two evil Malamar as Inkay becomes enraged by their actions. This allows Clemont to release Bunnelby to use Dig making their escape as James carries an enraged Inkay away from the Malamar.

After James' Inkay convinces good Inkay and Malamar to help them, they return to the tower and attack the evil Malamar.